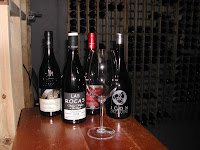 Actually not last night! We had some friends over for dinner last night and I dug out 2 bottles of a lesser-known Ravenswood wine called "Icon". Icon (the far right bottle) is a GSM, a blend of Grenache, Syrah & Mourvedre and I had a 2002 and 2003. It is interesting to do a Vertical tasting, which is when you taste/compare (or just DRINK) wines from the same producer but from different vintages. Contrast that with a Horizontal tasting where you would taste several wines (from different producers) from the same vintage. I thought the 2002 was a more fruit-forward and balanced wine while the 2003 was a bit more tannic. One guest is more or less beginning to learn about reds and I was pleased that he caught some differences as well. We weren't really doing a formal tasting but we did transition from one wine to the other and found some cool differences. Final shot-while each Icon was a GSM, the percentages of each varietal in each vintage differed. It's intriguing to taste the winemaker's (or wine blender's?) skill in producing a very similar wine (i.e. each year was a solid GSM, with true varietal characteristics) but also to be able to taste the differences. Likewise, it was fun to choose a favorite. Either way, it is always great to dine with friends and enjoy a glass or two together! Cheers!
Posted by Bo Wagner at 8:00 AM No comments:

Yo Ho and a bottle of Merlot!

Ahoy mateys! It's that time of year again--it's TALK LIKE A PIRATE DAY again and I hope you raise a glass with a loud ARRRRRR! Cheers!
Posted by Bo Wagner at 1:29 PM No comments: